The Fisterra-Muxía Camino is the only route that begins in Compostela. Though the Camino as we know it ends in the city of Santiago, the pilgrimage is not over in Compostela.

Since ancient times, all nations and travelers who came to this western corner of Europe felt the need to follow the sun to reach this land’s end in order to see the immensity of infinity and the sun sinking into the ocean. In the beginning some pilgrims decided to continue their pilgrimage to the coast (Costa da Morte), known as the end of the world back then, making the last stretch of their trip a route marked by the Milky Camino.

In the land of Fisterra and the pilgrimage tradition, legend has it that the Apostle Saint James (Santiago) was executed in Palestine, and that his disciples brought his body to Galicia in a miraculous boat made of stone, thus fulfilling Saint James’ wish of resting in the land where he had preached.

The disciples of Saint James came to the old city of Dugium (current Fisterra) in order to get authorization from the Roman general to bury the Apostle. The general did not trust them and sent them to prison. The disciples managed to escape, and when they were about to be recaptured, they crossed a bridge, and it collapsed on the Roman troops. The body of Saint James was miraculously saved and his disciples with it.

There are some miraculous stories in Muxía, such as the apparition of the Holy Mary in mortal flesh. In the Punta da Barca (Muxía) there were at least three sanctuaries throughout history.

The last shrine was initially constructed in 1976, and it is still in an amazingly beautiful environment. It preserves the stones that tradition has linked to the hull, the sail, and the rudder of the stone boat that brought Holy Mary to this land to encourage Apostle Saint James in his preaching. The temple is very frugal and was finished in this century. It displays two towers and a superb baroque altarpiece with a Lady chapel.

Tradition also includes some pagan elements of this area, in particular those related to stone. Popular culture attributed healing and magical powers to them. The “Pedra dos cadris” (“Stone for Kidneys’health”) was said to improve renal problems for those who crawled underneath it. The “Pedra de abalar” (“Rocking stone”) has been thought to foretell powers, and popular belief has it that the stone rocks when it wants something or when a disgrace is coming. Pilgrims walk to this sanctuary to watch the stone rock, and they interpret that it means that our Lady is willing to grant what they ask for. In other cases the stone was said to cure infertility.

Nowadays devotion is concentrated on two images, whose legends refer to the fact that they were brought by the sea; the Cristo de Fisterra has a human-like appearance while the image of Holy Mary in Muxía is small. The Santo Cristo de Fisterra is said to have reached this village by the sea after having been cast away from a vessel during a storm. It is a highly valuable Gothic relic of the 14th century and has been given human attributes such as sweating or the growth of hair and nails. At some point in time, the Santo Cristo de Fisterra was one of the main attractions bringing visitors to the “end of the world”.

Also in Fisterra is the church of Santa María das Areas, which still houses an important Gothic heritage as well as the Baroque chapel of the Santo Cristo and Renaissance chapel of the Virxe do Carme. The main chapel (14th c.) houses the stone image of the Holy Mary (16th c.) and, at the entrance, the precious Santiago Peregrino. The chapel of Quinta Angustia and San Miguel (end of the 15th c.) is adjacent to the wall of the Epistola. On the other hand, that of Santa Lucía (13th c.) and of O Carme guard an interesting outside door of late Gothic style. Although front of the chapel is mainly Romanesque style, there are traces of the Gothic-style “mariñeiro” (seaman) outside. The towers (16th c.) are also remarkable as well as the Gothic cross (15th c.) built at the edge of the road. 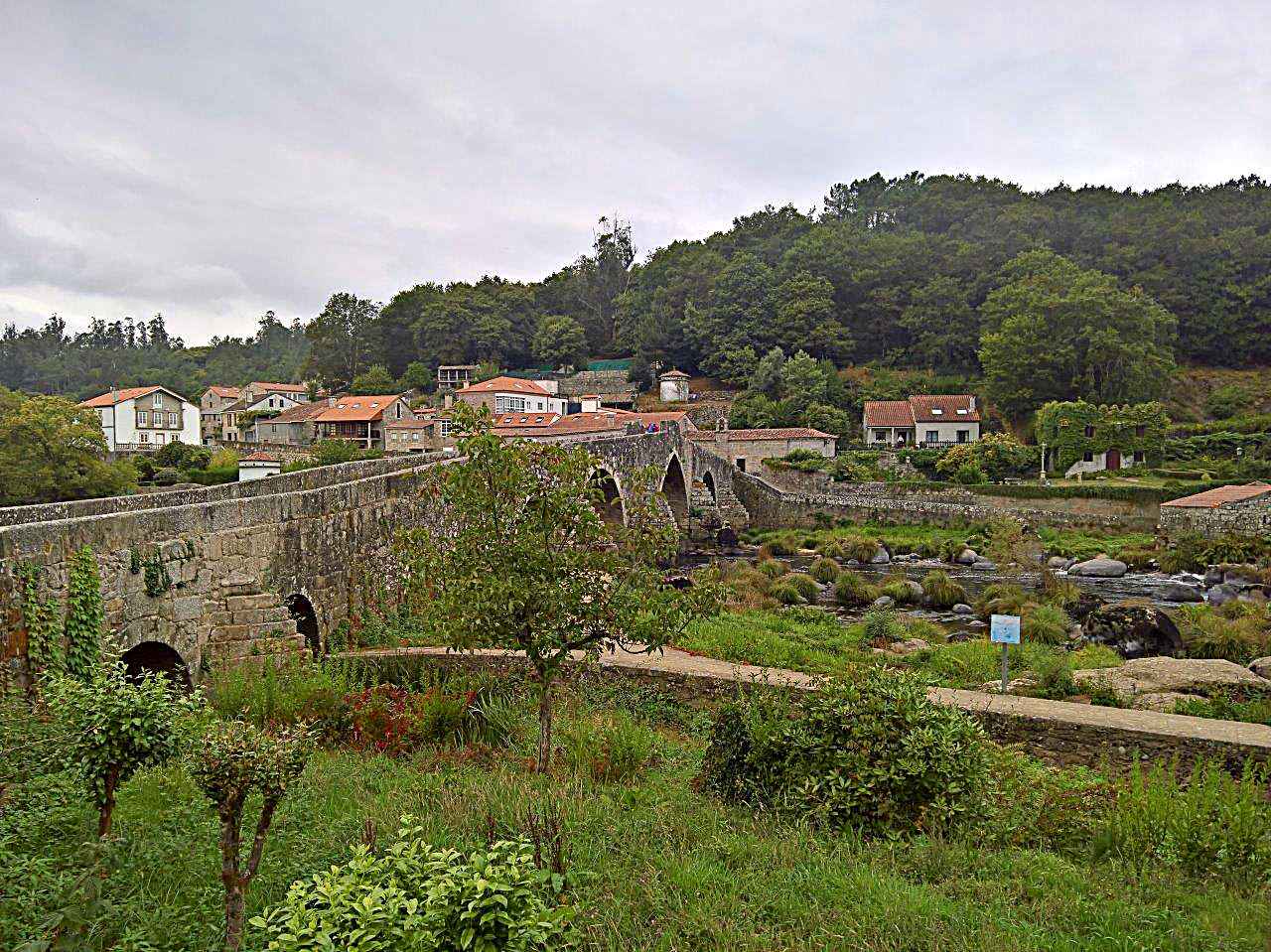 Since ancient times, all nations and travelers who came to this western corner of Europe felt the need to follow the sun to reach this land’s end in order to see the immensity of infinity and the sun sinking into the ocean. 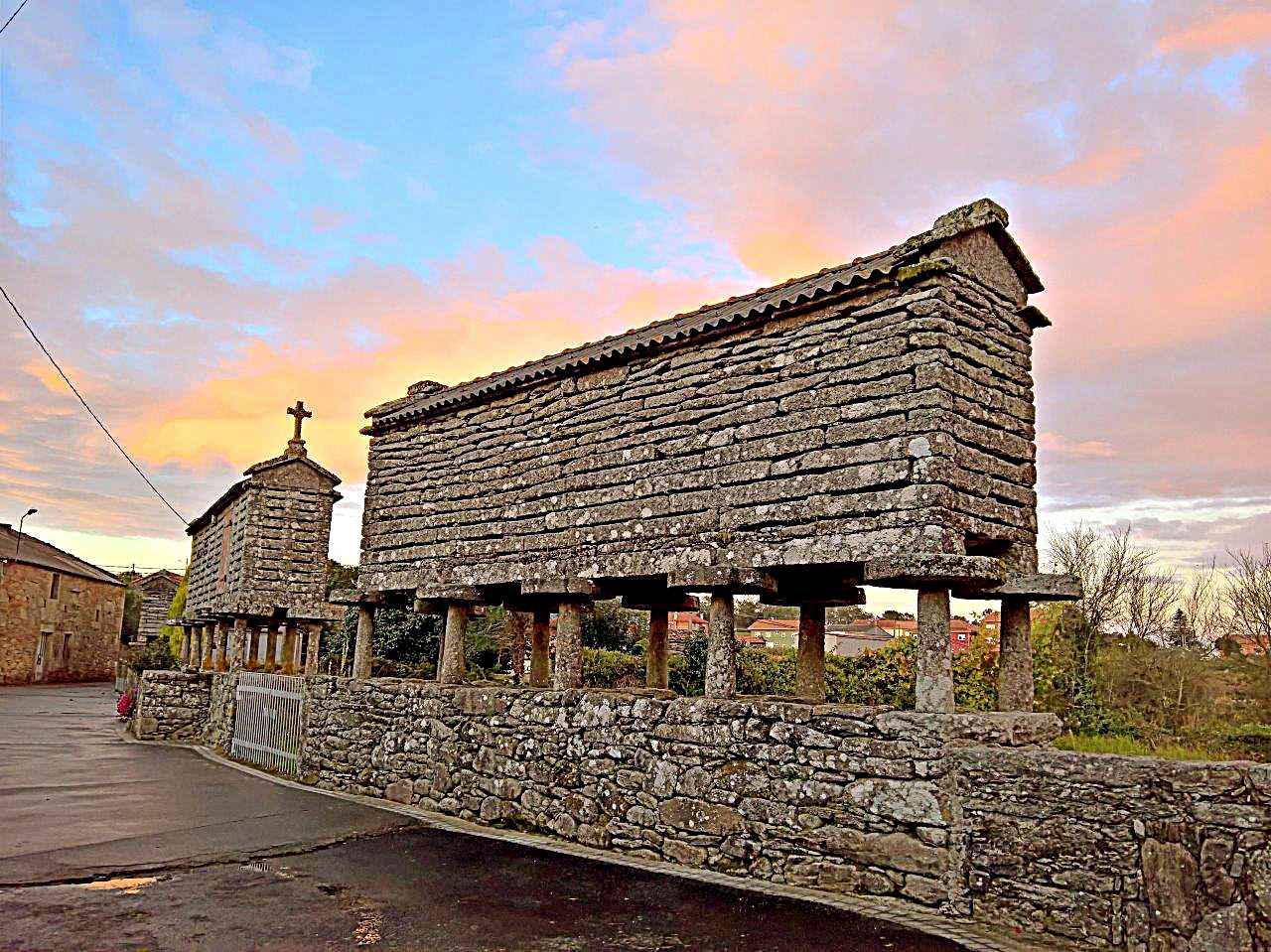 There are some miraculous stories in Muxía, such as the apparition of the Holy Mary in mortal flesh. In the Punta da Barca (Muxía) there were at least three sanctuaries throughout history.